I can read a cookbook like a good book or an issue of Tea Time magazine, every page, cover to cover.

I recently went to a bazaar and among a few other things (yes, I did get more seasonal aprons for my dish soap bottle) I found two old cookbook pamphlets that I’m guessing are from the late 1940’s or early 1950’s. One is all about desserts and the second is one that apparently came with the purchase of a Hotpoint Electric range. I don’t know if appliance companies even bother with recipes anymore, though most of my small kitchen appliances did have a few recipes included in the instruction pamphlet.


I thoroughly enjoyed these two little pamphlets and will share some of the most interesting features of the Hotpoint Electric Range pamphlet below and the desserts pamphlet in another post. I contacted General Electric (which has always owned the Hotpoint brand) and they’ve given me permission to share the following scanned pages with you.


One of the most interesting things about this range is what they refer to as the ‘Thrift Cooker’. From what I can tell it’s sort of a combination of a slow cooker/pressure cooker/steamer that was built right into the top of the range. I watched a video for a different company (from the same era) and their built in cooker had a pressure cooker type lid for the built-in pot. Its heating element could also be raised so that it functioned just like any of the other burners.


This is the only photo that includes the Thrift Cooker though they did include several recipes.

This pamphlet also includes several recipes for desserts, and surprisingly, many of them are referred to as ‘puddings’ just the same as most people in the UK refer to any dessert other than cake.
This recipe happens to be for a pudding that you prepare in the Thrift Cooker. This page also lists other Thrift Cooker recipes in the pamphlet. 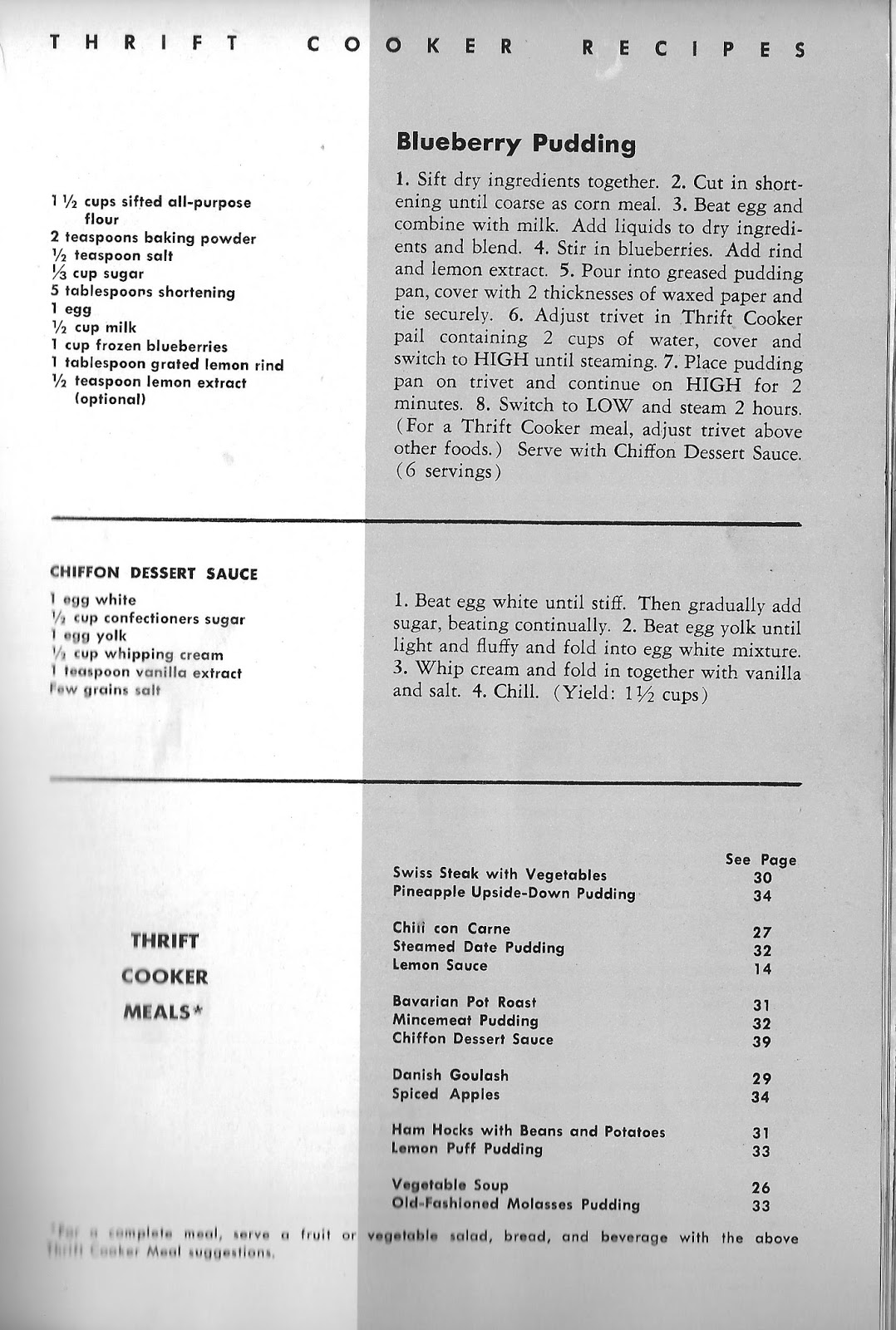 The Hotpoint pamphlet included this reference page, I’ve never before seen reference to the sizes of cans before. I’d heard of a #10 can and I sort of figured that the others probably did, too.

I also don’t think I’ve ever seen the cups to weight conversion in any of my other cookbooks, though I would argue that the brown sugar measure isn’t quite right.


The other thing I found of interest is this photo and the subsequent menu plans that allowed/encouraged one to cook the entire meal at once in the oven. I suppose I always knew this was possible but I’ve never tried it. I think most of us put the roast in the oven and then cook everything else on top of the stove.When the roast comes out the rolls go in and possibly later the oven might get used to warm up dessert.
It really makes sense to put it all in the oven and not have to stand over the stove. Save time, effort and energy!

Here’s one of the menus they provide to cook everything in the oven at once. Who knew they’d figured out oven-fried chicken way back then? The other somewhat surprising fact I’ve found is that over-cooking vegetables in a lot of water really wasn’t what everyone did prior to the advent of steamer baskets. In this pamphlet as well as other sources I’ve read (or watched) steaming vegetables was common practice. Yes, there were aware that boiling them was just pouring the goodness down the drain. The recipes in this pamphlet as with many other recipes I’ve read from prior generations all assume some general food knowledge; the size of a medium onion or the best type of cooking apples for pie or how to cut-up a chicken for frying, many things that may or may not be common knowledge now.
Even with the plethora of different types of fruit and vegetables I don’t think we can get some foods that were readily available in years past. I may have seen bags of new potatoes in the store but not all the often and it’s not as if you have a choice of how many to buy; you get whatever they decide to put in the packaging. I’ll save the rest of the grocery store packaging rant for another time.

By the way I’m just going on and on about this little pamphlet you’d think it was the greatest thing since the electric toaster. It’s not just this one little book I’m also enamored with other very old cookbooks and homemaking books I’ve found. More on that another time.

To finally wrap this up I’ll leave you with the the table of contents. 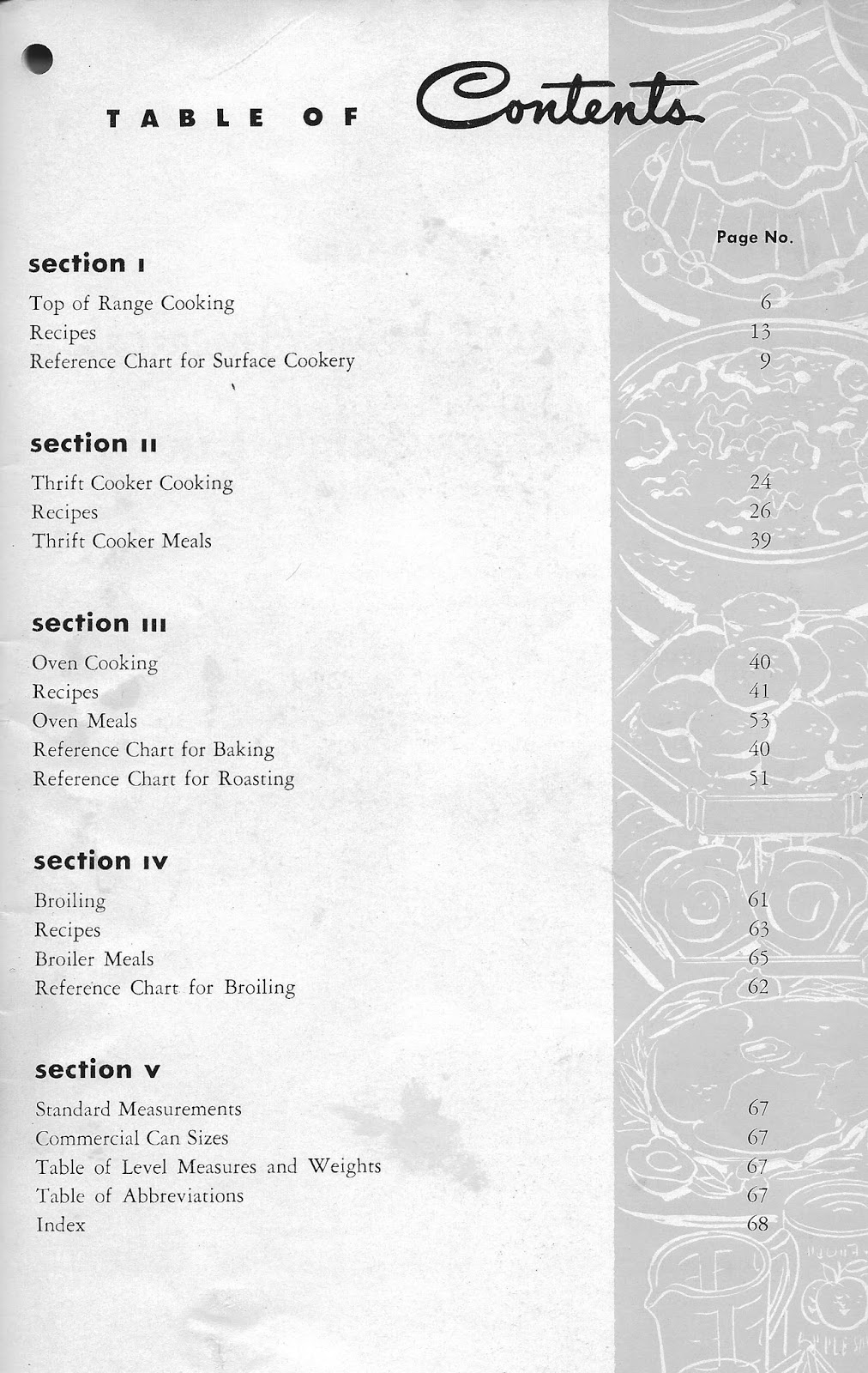 Your etiquette tip for this post;
As you go to sit in a chair you enter from the chair’s right side; that means your left hip goes in first. Does it really matter all that much? Probably not, unless it’s a crowded table. If everyone is following the same guideline it will certainly avoid a lot of jostling and awkwardness.

I’m joining the link up party over at Make It Pretty Monday!
Happy Spring and Share Your Cup at Have a Daily Cup of Mrs Olson and Dishing It & Digging It at Rustic and Refined.

1 thought on “I Adore Old Cookbooks”