No I’m not turning into an alarmist or ‘doomsday prepper’, I just happened on the videos I mention below and found the topic quite interesting.


We’re hearing a lot about minimalism these days especially from the millennial crowd. TV shows like Tiny House and all over YouTube with wardrobe reductions like Project 333 (33 items of clothing for 3 months) and other ‘capsule’ wardrobe guidelines.  Just like with so many other ‘trends’ this isn’t really new. Firstly, there have been many minimalist movements over the years and secondly, in many countries it’s the status quo.


What many are forgetting are the times in history when ‘minimalist’ was forced; the Great Depression or WWII for example. You may have heard of  ‘Depression Era mentality’ there are the people who tend to save everything because they grew up during the Depression (these folks may or may not be hoarders).


During WWII there was rationing but in the US and in the UK. I recently found some great videos that are reenactments of what life was like during WWII in the England. Rationing wasn’t just food, it also included fuel, clothing, shoes, pretty much everything was rationed. Talk about minimalism. 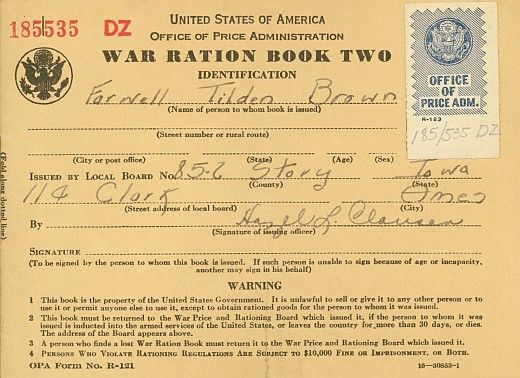 I really enjoyed this series of videos, made several years ago, quite a bit. These are just a couple of people who lived through WWII and the rationing. They talk about how things were in England during the 6 long years of the war and how they managed. I really wish I could find this on DVD (even video tape) since I can’t seem to find the entire series in an easily watchable format on YouTube. There are several that show up in a weird faux move theater format that isn’t very easy to watch. This series (link below) is a more recent documentary with the historian and archaeologists recreating, in detail, specifics from the six years of World War II.

Where Wartime Kitchen focuses on the experiences of the two main cast members, Wartime Farm goes into more depth and shows a broader variety of what was happening in the country during the war. I’ve really enjoyed them both but there’s something about the Wartime Kitchen and Garden that I am drawn to, maybe because the people featured in those videos actually lived through the those very austere times.


I happened on this cookbook Grandma’s Wartime Kitchen it contains recipes from the US’s rationing efforts. After learning about the amazingly strict rationing in the UK, it’s interesting to read about how things were somewhat the same and somewhat different in the US.


We’re very fortunate that we haven’t had to deal with shortages (other than a few things during the 1970’s but only for a short time) in a very, very long time. Someone once said, “those who don’t learn history are destined to repeat it” so it may be wise to learn a few things about making do from those who actually lived through those difficult years.